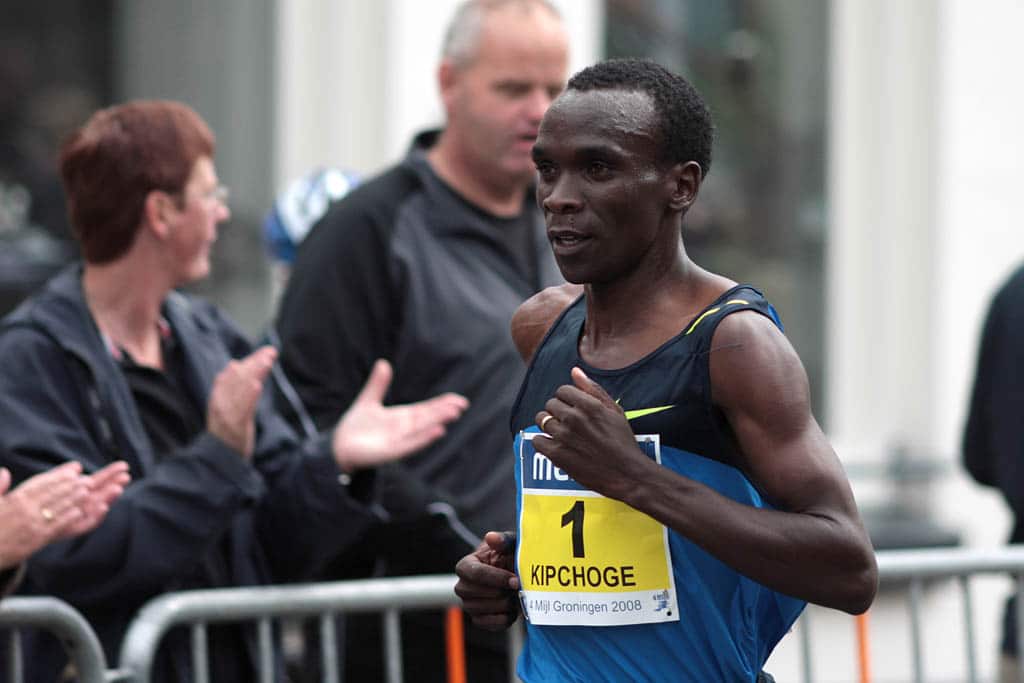 Eliud Kipchoge – For the World’s Greatest Marathoner, It’s All About Consistency

Eliud Kipchoge, from the African country of Kenya, is the fastest marathon runner in history! He is the only person to run the 26.2 marathon distance in under 2 hours.  As amazing as his athletic accomplishments are, the story of how he has risen to become the best, and where he started, is even more impressive. Eliud Kipchoge provides great lessons for anyone who aspires to be great at something.

Kipchoge was born in 1984, in Nandi County, Kenya, and was raised by a single mother.  He learned to run and got a lot of practice, by running 2 miles to and from school each day!

As a teenager, he earned money by transporting milk on a bike. He would ride a 40km round trip from his family home to a nearby town – collecting and then selling milk from farmers. With the small amount of money he made on his milk trips, he saved up for 5 months to buy his first pair of running shoes.

Through his childhood, Kipchoge was advised to work hard, and behave in a fearless manner.  This would suit him well as he became more serious about running in his teens.

Eliud Kipchoge met his running coach Patrick Sang in 2001 at the age of 16. Sang was a former Olympic runner and also a neighbor of Kipchoge’s! As a child, Kipchoge would join with his friends around a black-and-white TV to watch Sang compete.

Kipchoge first approached Sang to help him create a training program.  After Kipchoge won his first race, Sang provided him with a stopwatch, training gear and a training program that helped him develop the dedication and consistency that he has.

The two began a long relationship that would completely change Kipchoge’s life. With Sang’s guidance, Kipchoge would eventually go on to win many prestigious races including the 2016 and 2020 Olympics!   Along the way, he set the world record in the marathon at the 2018 Berlin Marathon.

And then in 2019, Kipchoge ran the marathon distance at a special event in Vienna, Austria, achieving a time of 1:59.

The run did not count as a new marathon record, as standard competition rules for pacing and fluids were not followed and it was not an open event. He became the best in the world.

Running a marathon under two hours is something Kipchoge wanted to do not just for himself but for the world.  The most important thing to me is inspiration, not fame” Kiphoge said.

He wanted to prove that “no human is limited”. “The reason to run 1:59 is to tell that farmer that he is not limited; that teacher that she can produce good results in school; that engineer… that he can go to another project.”

His mindset was built upon lessons he learned as a child and his racing career. It combines discipline, consistency, self-belief, and mental toughness. Also, he is a very humble person and, unlike some other marathon runners, has never been caught up in the distractions created by fame and wealth.

Besides trying to win his 3rd consecutive Olympic marathon, Kipchoge is after another world record!  He wants Kenya to become the country to plant the most trees in the world.

“We can celebrate for being in the Guinness Book of World records by being the country which has planted the largest number of trees,” he said. “We want every Kenyan to spend at least one hour 59 minutes to just plant 60 seedlings, only 60. Kenya has a population of over 51 million people, so this initiative has the potential to see millions of new trees planted.”

Here is a video that tells Kipchoge’s story:

Here is a video of Kicphge finishing and celebrating his sub-2-hour marathon: