United We Stand, Divided We Fall – Quotes About Unity in America

It is a time of change in America. The world is watching…and lately, it has not been all that pretty of a sight.  But, beneath that change and disruption is something much, much greater than all of the noise.  There are the timeless values of America including freedom, unity, and bravery.  Our list of quotes about unity in America makes these common values crystal clear.

In these times of change, each American, regardless of gender, religion, political belief, ethnicity, or geography, must pause and make sure that they are upholding those principles and striving to work together. 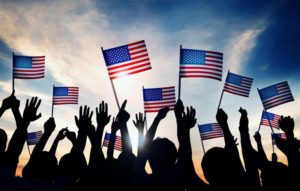 As you can see from the quotes about unity in America below, there are many diverse American leaders listed below. From the old days to the current days, from different political parties and different races, there is one common theme that holds true: unity and support of each other make us a great nation.

During times of change, Americans young and old, including you, need to remember these principals and stand up for them.

As John Dickinson said in 1768, in the Liberty Song: “Then join hand in hand, brave Americans all! By uniting we stand, by dividing we fall.”

Now enjoy these great quotes about unity in America and reflect on what you, your family, your classmates, and your community are doing to uphold these values.

And if what you see around doesn’t agree with these quotes, don’t sit by and watch.  Take your direction from these men and women below.  And do what you can do to help America become the best version of itself.

Quotes About Unity in America

This video shows the power of unity and helping one another: